One of the pleasures of eating out begins before the food is served. For many diners, the first course is a thorough reading of the menu mixed with discussion among dining companions as to the options. Braille readers are denied this camaraderie if a print menu is all that is available. 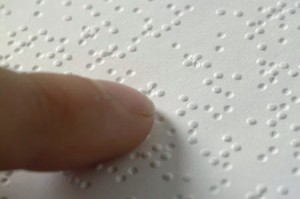 The first menu I brailled was for a popular Seattle restaurant. This was in the days when braille menus in restaurants were a rarity. In this restaurant, the braille menus were prominently displayed on a table in the spacious entry way where they drew attention from all diners.

When the restaurant manager offered the very first braille menu to a customer who was blind, the woman burst into tears. It was the first time in her life she had been given a menu she could read for herself. She placed her order and then read the menu from cover to cover while she enjoyed her meal.

The enthusiastic manager kept me well supplied with free lunch coupons, which I shared with my braille reading guests who eagerly used the braille menus. Although the restaurant is no longer open, the good will over the braille menus lingers.

This was told to me by one of my braille students.

A lady was eating in a restaurant. Her guide dog was lying under the table with his head facing out, just as she had placed him. Some bacon fell from a plate carried by a passing waitress and landed right in front of the dog’s nose. The dog quickly crossed both front paws over his muzzle, as if to resist the temptation, and remained in that position until the bacon was removed. All guide dogs receive specialized training in staying on task when working, but isn’t that exceptional discipline?

Perkins the Braille Dog would have snatched that falling piece of bacon before it hit the ground. Then again, Perkins is not a guide dog. He’s a family pet.