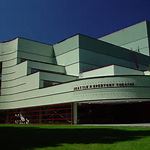 This season the Seattle Repertory Theatre offers braille programs and audio-described performances for its theater goers.

The current play is King Charles III, a play of the future, described as follows on the Rep’s website:

“The Queen is dead, long live The King!” After a lifetime of waiting, Prince Charles finally ascends to the throne, flanked by wife Camilla, sons William and Harry, and daughter-in-law Kate. The Prime Minister proposes legislation designed to restrict the freedom of the press, which the newly crowned sovereign opposes, subverting the understood rules of British democracy. Written in blank verse, this smash Broadway and West End hit and the 2015 Olivier Award winner for Best New Play presents a modern take on the future of the British Royal Family.

The Seattle Public Library has prepared a reading reading list for those who wish to do more extensive background reading.

For tickets, call Roland at 206-787-1435
or visit www.seattlerep.org/promo/described

The Seattle Repertory Theatre is located at the Seattle Center, 155 Mercer Street, Seattle 98109.

If you wish to enjoy a meal out before or after the performance, the Rep’s website includes a list of appealing dining possibilities in the area. http://www.seattlerep.org/Plan/Dining