“As you notice braille on bathroom signage, ATM’s, elevators and such, consider how much you rely on print in your every day lives, and be assured that I, and others who cannot see to read print, are grateful to have its equivalent, braille, allowing us to read books, phone numbers, recipes, menus, directions and the like, and literally having it at our fingertips.”

January is National Braille Literacy Month in honor of Louis Braille’s birthday on January 4, 1809. Here is a brief sketch of his inspiring life and work.

Louis Braille was born January 4, 1809, in Coupvray, France. An injury to his eye at age three resulted in total loss of vision. When he was ten, he entered the Royal Institute for Blind Youth in Paris, the world’s first school for blind children. There he would live, study, and later teach.

When Louis was fifteen, he developed an ingenious system of reading and writing by means of raised dots. Two years later he adapted his method to musical notation.

Mr. Braille accepted a full-time teaching position at the Institute when he was nineteen. He was a kind, compassionate teacher and an accomplished musician. He gave his life in selfless service to his pupils, to his friends, and to the perfection of his raised dot method, which is known today as Braille.

Louis Braille died at age forty-three, confident that his mission on earth was completed.

A few years ago I was asked to review the braille signage in a downtown office building. There had been complaints from visitors about errors in the braille, and the owners wanted to be sure everything was up to standard. The biggest challenge was the numerous elevator banks in this tall structure.

Most of the braille errors made sense if you considered the signs were done years ago by sign-makers who relied on specialized equipment to produce the signs, but did not read braille themselves. Braille has its nuances, exceptions and rules of usage.

One sign had me puzzled. It made no sense whatsoever. As I was driving home, I saw that braille sign clearly in my mind’s eye, and I burst out laughing. It had been installed upside down! 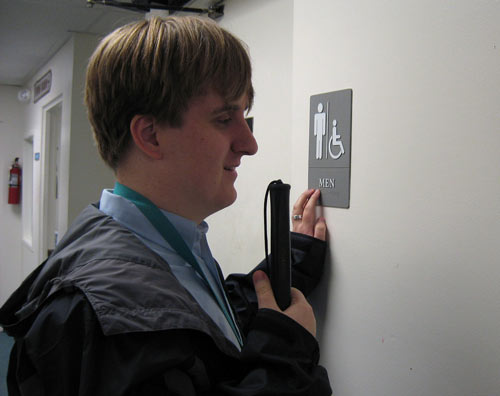 With the advent of the Americans with Disabilities Act (ADA) in 1990, special signage has improved in quality and quantity. The ADA addresses discrimination in employment situations and public accommodation for people with special needs.

Typically the sign includes internationally recognized tactile picture symbols, braille, easy-to-read large print tactile typeface, non-glare surfaces, and high light and dark contrast. There are guidelines for all of this, as well as for placement of the signs on the wall

Spot Public Braille and get a Free Braille Alphabet Card

Now that you are aware of these special signs, you will begin noticing them in many places: elevators, restrooms ATMs, tactile floor plans. Use the comment feature below this article to let us know what you find. Everyone who responds with a list of public places where he/she has spotted braille signage will receive a free braille alphabet card.