My mentor, colleague and friend died last week. She was 92. For more than half a century, Jeanne Horsey was devoted to bringing the benefits of braille to those who are blind. Her accomplishments left a long trail that continues to touch lives and open doors.

I met Jeanne in 1990 when I arrived at her Seattle home for my first braille lesson. I, too, wanted to work with people who are blind and knew that braille and literacy were essential elements in what was to become my life’s work. I was the only interested student at that time. I didn’t want to wait, so Jeanne gave me private instruction. She let me gallop along at my own pace as long as my lessons met her high standards.

Once a week at 10 o’clock in the morning, we sat at her dining room table, and I learned braille. The first lesson, however, happened in the kitchen where she was helping her retired husband prepare his mid-morning breakfast. She put a Perkins brailler on the kitchen table, opened the manual to a chart of the braille alphabet, and told me to braille three rows of the letter “a,” then “b” and on through to “z.” I left that morning knowing the braille alphabet.

One morning when I arrived for my lesson, I noticed pages of brailled paper hanging from a cord strung across the deck. Jeanne explained she had shellacked those pages to make the delicate raised braille dots more durable, and she had hung them out to dry. That was but the first of many surprising things I learned from Jeanne.

Braille Textbooks for the School

Jeanne is largely responsible for getting braille textbooks in the Washington state public schools. Back in the 1950’s when she worked for the Seattle School District, she was dismayed at the dearth of braille materials available for blind students. As often happens with new endeavors, Jeanne met with numerous obstacles. Undaunted, she learned braille and was certified by the Library of Congress as a literary braille transcriber. She taught the course to others — parents, teachers, friends, anyone who wanted to learn — and developed a cadre of braille transcribers eager to produce braille.

Jeanne founded Seattle Area Braillists (SAB), a nonprofit organization dedicated to transcribing textbooks into braille for the schools. This dedicated group of highly skilled ladies spent most of their waking hours transcribing textbooks for all grade levels to be used by students throughout the state. Collectively, SAB members held Library of Congress certifications in Literary Braille Transcribing, Braille Mathematics Transcribing, and Music Braille Transcription. They knew the complicated Code of Braille Textbook Formats and Techniques. Some were skilled at creating exquisite hand-made tactile drawings, illustrations, and maps.

At Jeanne’s invitation, I joined SAB (I was the youngster of the group), received my Library of Congress Literary Braille certification, and was assigned a fourth grade Washington State History textbook to transcribe. This was before the advent of computer programs in the braille transcribing world; all work was done by hand with the Perkins brailler. For those not familiar with the Perkins brailler, using one can be compared to typing on an old manual Underwood, being very careful not to make a mistake because of the difficulty or impossibility of making a neat correction.

Jeanne’s interests went beyond the teaching of braille. Nancy Hatfield, Director of Early Childhood with Washington Sensory Disabilities Services, speaks about Jeanne’s leadership of a group of volunteers who helped with a playgroup for families with blind and visually impaired infants and toddlers. “Back in the late 1980’s and early 1990’s, this group met weekly in the Seattle area. Jeanne was a kind and reliable person who interacted with the parents and children in such a sensitive and caring way.” 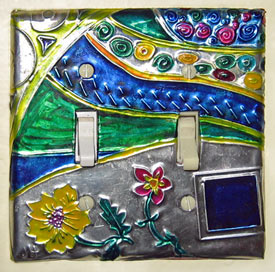 Jeanne always had an interest in art, but she didn’t have time to pursue it until later in life. She loved to experiment with various media. It is interesting, and perhaps fitting, that one of her early art projects involved using sheets of thin metal left over from her years of making tactile maps for students who were blind. She used a repoussé technique to create tactile shapes and images in the metal, highlighting the designs with acrylic paint. I have replaced most of the electric switch plate covers in my home with Jeanne Horsey repoussé originals.

Recently Jeanne and her son, David Horsey, political cartoonist and holder of two Pulitzer Prizes, opened a joint art exhibit at Aljoya Thornton Place in Seattle. Jeanne’s display included a selection of watercolors and some mixed-media work. David contributed 15 recent color cartoons produced for the Seattlepi.com. It was a high point for mother and son. The show closed February 21, 2012, just one day before Jeanne’s passing.

A celebration of Jeanne’s life was held February 26 at University House in Seattle where she lived the last fifteen years. Jo Linda Finne, retired Teacher of the Visually Impaired (TVI) who first met Jeanne in 1976 when Jo Linda was a TVI for the Seattle Schools, said this of the service:

“Today’s memorial to Jeanne was simply wonderful! It seems that no one person and no one group realized the extent of her contributions. It wasn’t just her commitment, which was formidable. And it wasn’t just her great warmth and graciousness, it also was her expectation for excellence and service. Jeanne was never self-aggrandizing. She quite simply loved braille and loved teaching it. Jeanne cast a long shadow on services for blind and visually impaired students in Washington state. It was a great honor for those of us whose lives have been touched by Jeanne!”

Rest in peace, dear Jeanne, knowing that your legacy continues.

The Acacia Memorial Park and Funeral home posts an obituary in memory of Jeanne Horsey. There is an online guest book where friends can share with her family.

This video clip is special. Be patient, it begins with a commercial.